Bruce Killen’s Julius Bauer “cabinet grand” upright piano stands alone as one of the finest pianos I’ve ever played. It is

also one of the oldest. Built in Chicago, this instrument has stood the test of time and is as lovely today as when it first rolled out of the factory in 1887.

I interviewed Mr. Killen today but spent most of the time talking on the phone to his Aunt Phyllis whose grandmother was a piano teacher. “The Julius Bauer piano was purchased by Hulda Roselia Swanson around 1900. She resided in Nebraska where she was a piano teacher.” Phyllis remembers how the piano was shipped to her great uncle in Arcadia, CA where she and her family enjoyed many musical hours together. In 1946, Phyllis started playing the piano…picking out tunes by ear so much so that her mother bought the piano for her. “My mother bought the piano from my grandfather. She paid him $25 so that it was legally mine!”

In 1950 the piano was moved to Monrovia and later to West Covina when in 1960 it was professionally refinished which showed the beautiful walnut veneer hidden beneath layers of crusty varnish. It got moved 5 more times before finding its current home in Fairfax.

When Bruce asked me to come out to tune the piano, my first inclination was to replace the worn ivory keys with new plastic ones. His daughter Amara, however, insisted that the original ivories be saved as they were the ones her ancestors played on all those years.
I acquiesced and was able to restore the ivory keys which has met with everyone’s approval!

After I finished working, Mr. Killen said he had something to show me. It was a beautifully framed history of the piano 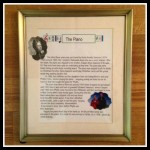 complete with pictures of those who owned it from the beginning. Someone took the time to chronicle this history because of what it represents, namely the love that is at the center of their family. It is a wonderful tribute to the legacy of the piano and its power to connect people for over a century. It is a legacy that will continue in the Killen family for many years to come.